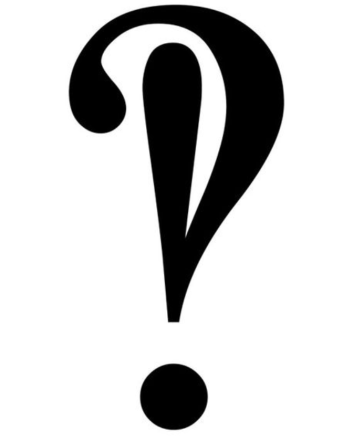 In writing, sometimes it is necessary to express both excitement/surprise and disbelief at the same time. The most accepted method of showing these emotions through punctuation is to use both a question mark (?) and an exclamation point (!).

Examples:
Did that dragon actually blow bubbles out of his nose?!

You saw Marvin kissing whom outside of study hall?!

However, there is a nonstandard symbol, called the “interrobang,” that melds both the question mark and the exclamation point into a symbol that looks like this: ‽

Did that dragon actually blow bubbles out of his nose‽

You saw Marvin kissing whom outside of study hall‽

The name “interrobang” comes from comes from a combination of the words “interrogative point,” which is another name for a question mark, and “bang,” which is printers’ slang for an exclamation point.

Click here and never worry about coming up with social-media posts again: https://www.etsy.com/listing/766512443/on-sale-social-media-content-calendar

Interrobang origins
In 1962, advertising executive Martin K. Speckter invented the mark, thinking that advertisements would look better if surprised rhetorical questions could be conveyed with a single punctuation mark. He proposed the new mark in a TYPEtalks magazine article, thus launching a fledgling campaign for the interrobang.

For a brief period, it seemed like people might widely adopt the little punctuation mark that could. The year 1966 brought the release of the Americana typeface, which included the interrobang. Two years later, the mark became available on some Remington typewriters.  And during the 1970s, Smith-Corona typewriters also offered the mark.

Using the interrobang
The interrobang is available through Microsoft Word. To use the mark, change your font to Wingdings 2. Then press the key marked with a tilde. (It’s beside the number one key on the top left side of your keyboard.) This will insert an interrobang into your Word document.

Now you will be able to express excitement mixed with surprise and disbelief with one stylish mark. Just imagine yourself typing the following:

Wait, you’re telling me not enough people are in lust with the interrobang‽

5 thoughts on “Interrobang: Is this the coolest name for a punctuation mark ever‽”