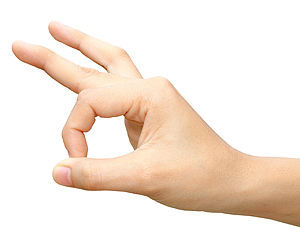 You are, no doubt, familiar with OK. These two strung-together letters have made one of the world’s most commonly used words. Today we’re going to learn the origin of this universal term for all right, sure, and fine and which of its various spellings are correct.

Etymology
OK started as a joke. In 1839, it was a trend for newspapers in Boston to use initialisms that represented misspelled phrases. For example, there was K.G., which stood for know go (instead of no go), and N.C., which stood for nuff ced (instead of enough said). This is how OK entered the language. Newspapers of the time used it to stand for oll korrect, a jokey version of all correct, funny because the spelling was the opposite of being all correct.

And then came this mutton-chopped fellow:

When President Martin Van Buren was running for reelection in 1840, his fundraising group in New York was named the O.K. Club. In this instance, OK also referenced his nickname Old Kinderhook (which came from his birthplace in the New York village of Kinderhook). Van Buren lost, but the word gained popularity.

Spellings of OK
OK was originally spelled with periods, looking like this: O.K. Today, it is more common to see it spelled as OK (without the periods) and okay. If you look it up in the dictionary, you will see either OK and okay listed as correct spellings of the word or all three versions: O.K., OK, and okay.

Style guidelines are largely fuzzy on the issue of one preferred spelling. For instance, The Chicago Manual of Style doesn’t even acknowledge the issue. However, The Associated Press Stylebook lists OK as the preferred spelling. The most important point is to pick one spelling and stick with it throughout your writing to maintain consistency.

However, note that spelling the word with lowercase letters (ok) is not, well, OK. I mean okay.