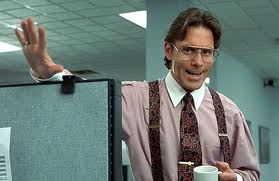 This paper says “TSP Report.” I think you mean “TPS.”

For Christmas last year, I got a T-shirt that read, “I’m silently correcting your grammar.” At first I thought it was a jerky gift (sorry, Jenny), but then I thought, “Eh, it’s true.” And now I kind of like it. As a copyeditor trained to spot every tiny error (Is that a hyphen instead of an en dash? No way, bugger.), I can’t help but see mistakes everywhere—on signs, in emails, in—gasp—news stories. I just can’t turn off the editor.

But when I spot an error in other people’s speech and writing, I usually silently correct them, instead of actually telling them they made a mistake. Correcting people’s grammar is a quick way to lose friends and become known as a stuffy know-it-all.

However, there are times when you should correct people’s grammar. I’ve outlined the whens and when nots below.

People learning English
If you know someone who is learning English as a second (or third or fourth) language, and they ask you to point out when they make mistakes so they can get better, then it’s okay. However, pay attention to their mood. If they’re talking about a fight with their boyfriend or a bad day at class, then that’s probably not the best time for a grammar lesson.

Coworkers
Normally you should be hesitant about correcting coworkers’ mistakes. If you spot an error in a casual email, for instance, leave it. But, if you see a mistake that could have major consequences, politely point out the error when you have a moment alone with the colleague. One example of when it’s okay to explain an error would be if a co-worker asks you to look over a PowerPoint for a quarterly update meeting with the big bosses and you see they used affect when it should be effect.

Basically, if you fear a mistake will cause someone’s reputation to be at stake, point it out in a kind, nonjudgmental manner when you are in a secluded environment.

Significant others
I think it’s usually always okay to correct your significant other’s grammar—as long as they are allowed to make fun of you when you have to use a calculator to figure out a restaurant tip. However, if your partner asks you to stop, then do.

Friends and family
Don’t correct friends’ and family members’ grammar mistakes unless they ask you to. Otherwise, you may be minus a friend and stuck getting fruitcake at Christmas. If their mistakes really irk you, start a grammar blog and write about the errors there (wink, wink).

Get your FREE guide to 2020 writing conferences here: http://www.dotanddashllc.com/conference-list

7 thoughts on “When to Correct People’s Grammar Mistakes”