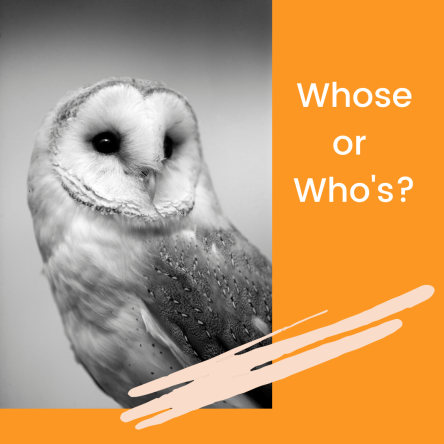 Whooo will know the difference between “whose” and “who’s” after reading this post? You will!

While words ending with an apostrophe and an S (i.e., the man’s car) are usually possessive, in the case of whose vs. who’s, whose is actually the possessive form.

Whose is a possessive adjective, which means it describes who owns something.

Who’s is a contraction of either who is or who has.

This sentence uses who’s because you can substitute who is. “Who is the best at math?” still makes sense.

This sentence uses whose because it doesn’t make sense when you substitute who is and get “Who is math homework is this?” Whose, in this case, is asking who the math homework belongs to.

Whose vs. who’s seems complicated, but once you know the rules, it’s easy to tell when to use which. Who’s got the power to tell the difference between whose and who’s? You do!

This post was written by Maud Grauer. She is a content creator and book editor for Dot and Dash. You can read more of her writing on the Dot and Dash blog: www.dotanddashllc.com/blog