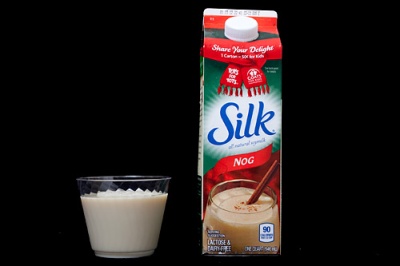 My favorite kind of nog

Regardless whether you find it palatable, eggnog is perhaps the beverage most identified with the Christmas holiday. Merriam-Webster defines it as: “a drink consisting of eggs beaten with sugar, milk or cream, and often alcoholic liquor.” It notes the first usage as the year 1775.

But, eggnog—where did we get that name?

The egg part is pretty self-explanatory. But, the nog part is a bit more mysterious. A search of nog on Merriam-Webster’s main site brings the definition: “a strong ale formerly brewed in Norfolk, England.” It lists the first known usage of this word as the year 1693. The origin it lists as “unknown.”

However, this is not the only definition for nog. Webster’s unabridged online dictionary lists other definitions:

nog (noun): a wooden peg, pin, or block of the size of a brick; especially: a small block built into a wall as a hold for nails

nog (verb): to fill in (as between scantling) with brickwood

brick nog (noun): brickwork filled in between the timbers of a wood-framed wall or partition

And then there is always noggin, a slang term for the head. Webster’s also lists nog as being a shortening of noggin. So, perhaps, in the late 1600s, a bunch of construction workers in Norfolk went to the local pub after working with nog or doing nogging, drank too much ale, and in the morning their heads hurt so badly that they couldn’t even say whole words—they just held their noggins in their hands and said nog.

Then again, perhaps not. But I’d like to think that’s what happened.