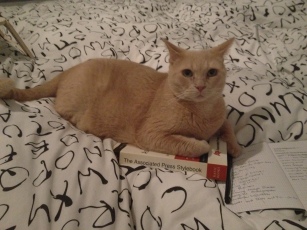 awe: an emotion variously combining dread, veneration, and wonder that is inspired by authority or by the sacred or sublime
aw: used to express mild disappointment, gentle entreaty, or real or mock sympathy or sentiment
—Merriam-Webster

I’m not sure how many people confuse these two words, but I know there are a few of you out there, so I hope this post helps. Mostly, I see this mistake in text messages I get from a certain lovely man. When I read them, I like to think he had an overwhelming revelation about how fantastic and pretty and kind and funny and talented I am, which he could only sum up in a one-word text reading awe. But because these messages usually come after I send him adorable photos of my cats, I’m assuming he really meant to type aw.

Aw not aww
Note that aw is not spelled with two Ws at the end, which is a common misspelling. When you’re saying it, you can drag out the word as long as you want for effect, but in writing, stick to one W.

Examples
When Larry saw the giant, he was struck with a feeling of awe. The giant was so huge and scary.

Then when the giant got on one knee and handed him a bouquet of flowers, Larry could only say, “Aw,” because he was so stunned by the kind gesture.

Quiz
Fill in either awe or aw in the blanks below. The answers are at the bottom.